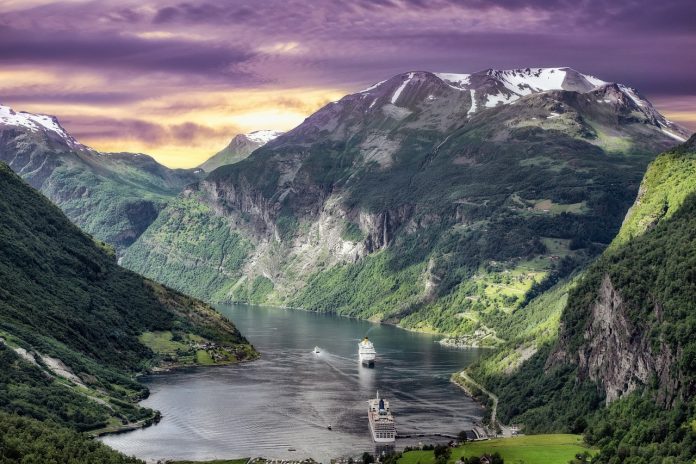 Are you planning to visit Norway? If yes, then here is a list of 5 Norway fjords that you must visit.

When the sun shines through the valley, between steep rocky cliffs, which rise like giants on both sides, the morning sun rays hit the narrow inlet of the sea, its water sparkling like diamonds…

The morning breeze, cold and fresh, soothe your lungs. While the rays of the sun hit on your skin, giving you such warmth… Your eyes can’t fathom the unbelievable fact that such magnificence exits in nature. You don’t want to leave behind this breathtaking view. You don’t want to go back.. the only thing that you wish, is to gently dissolve yourself into nature, to become a part of these… to become a part of these magnificent fjords.

It could be one of the rare places on earth. A place where the lushest words, the finest poetry, all forms of greatest art or not even a photograph or video of the highest resolution known to man, can do justice by trying to capture its exquisiteness!

It’s a place you must visit, to experience it on your own self, see it with your own eyes and feel it with your entire body. The Norwegian fjords, nothing even comes close!

The fjord’s inner part is known as the “sea bottom”. For this natural geographical formation to be identified as a “fjord”, it should be longer than how wide it is. If it’s wider than how long it is, it’s known as a “bay” or a “cove”. While bays and coves are relatively common across the world, fjords are not. The “fjord” word itself is Norwegian, which is now internationally recognized. Its basic meaning is “where one fares through”.

How Were They Formed?

When you think of “ice age”, you think of a single period of time in the ancient history which the entire world was covered in ice, right? Well, it’s not. Throughout earth’s history, it had gone through cycles of climate change, due to its orbit, geological factors and due to variations in the solar output.

Occasionally, the earth would experience a significant reduction in the surface temperature, which have lasted for thousands of years. During which times, glaciations or formation of glaciers would occur. However, due to natural factors such as carbon emissions from volcanoes, or solar activity, the temperatures would go down, melting down the glaciers.

The melting glaciers in coastal areas would slowly move towards the sea, for thousands of years, making glacial paths along the way. This would happen with each ice age which the world has gone through. (Yes, there have been more than one; at least five big ones, according to geologists. And here’s a bonus fact for you: We’re still living in an ice age! And it’s called “Quaternary”) This is how fjords are formed.

Where Else Can You See Fjords?

The longest fjord of the world can be found in Greenland. Scoresby Sund is 350 kilometres long! The deepest fjord is called Skelton Inlet and can be seen in Antarctica, which is 1,933 meters deep!

However, Norwegian fjords are the most popular among tourists, for their breathtaking beauty which cannot be seen anywhere else. Even UNESCO has named Western Norwegian Fjords in Geirangerfjord and Nærøyfjord and their surrounding area as “World Heritage Sites”. Plus, Norway has the most number of fjords in the world. Can you guess how many? It’s 1,190! No other country comes even close to the sheer number of beautiful fjords in Norway!

Do you still have doubts about why it should be “Norway” which you must pick, to witness the magnificence of the great fjords?

Located in the northern part of Norway, this unarguably is one of the most dazzling fjords in the country as well as in the world. Named as one of the World Heritage Sites by UNESCO in 2005, this is 15 kilometres long and 1.5 kilometres wide.

It’s one of the inner branches of Sognefjord, which is another beautiful fjord. This fjord is popular due to the steep and tall lush green mountains which are covered with snow on top, as well as it’s breathtaking waterfalls.

While there are many, the most famous and most beautiful waterfalls are, Friaren (The Suitor), De syv søstrene (The Seven Sisters) and Brudesløret (The Bridal Veil). If you plan to visit Norway to witness the fjords and if you only have time and budget to visit only one, this is the one!

Nicknamed as the “King of fjords”, it extends up to 204 kilometres, becoming the longest fjord in Norway and the third-longest in the world! At 1,308 meters, it’s also the deepest in Norway and the second deepest in the world! Hence the well-deserving nickname. It has more than a dozen fjord branches. These are also known as individual fjords. The most popular are the ones recognized by UNESCO – Geirangerfjord and Nærøyfjord.

This is the other famous branch of Sognefjord. It has many features that are similar to Geirangerfjord. These include steep hills and forest and snow-covered as well as beautiful waterfalls. Also named as a UNESCO World Heritage Site, it extends up to 18 kilometres. It’s known for its narrow beautiful passage, which in some areas are merely 250 meters! Filled with lush greenery and teeming with life, this truly is a magnificent fjord.

Expanding up to a length of 42 kilometres, this Fjord is also one of the most famous fjords in the world. It’s famous for its sightseeing tourist attractions, which are Prekenstolen and Kjerag.

It’s the second-longest fjord in Norway and is 179 kilometres long! Located in the middle of the country, this fjord is known as a national icon. It is named so because of its beautiful sceneries as well as the hillsides. These are filled with an abundance of fruitful apple trees. These trees add both beauty and colour to this scenic fjord.

While these are only the top five most iconic fjords, Norway’s got a lot more, which is equally stunning and will take your breath away. Don’t you think that visiting ‘fjord Norway’ deserves the top spot of your “Bucket List”?